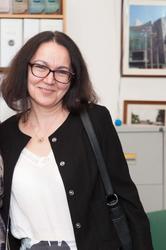 Dr. Nichita received her PhD at the Institute of Biochemistry in 2000, working on the role of N-glycosylation on protein folding. This study was performed in close collaboration with the University of Oxford, where she spent 3 months/year working in the Department of Biochemistry (1997-2000, as a beneficiary of a NATO fellowship). Dr. Nichita has shown for the first time the strict dependence of a cellular protein, tyrosinase, on the presence of N-linked glycans for native folding and biological activity.
Following the award of a Royal Society Fellowship, Dr. Norica Nichita started her post-doctoral studies at the University of Oxford in 2000. Using her competence in protein folding, she investigated in premiere the biosynthesis and assembly of the envelope proteins of a pestivirus - BVDV (used at the time as a surrogate model for HCV) and the possibility to use these host cell- dependent processes as novel antiviral targets.
In 2001, Dr. Nichita was the recipient of an International Research Development Award from the Wellcome Trust (UK), to start an independent group (the Viral Glycoproteins) and establish a completely new direction of research (molecular virology) at the Institute of Biochemistry in Romania. The results obtained by the group during 2001-2003 have clarified molecular features of pestivirus morphology, have answered how these properties could be exploited to design new therapeutic strategies targeting the envelope proteins and were published in important peer-reviewed journals in the field. As recognition of the impact of her work on pestiviruses, Dr. Nichita received the “Emanoil Teodorescu” prize of the Romanian Academy in 2003. These achievements and the ongoing collaboration with the former laboratory at the University of Oxford have secured the award of a second Collaborative Research International Grant from the Welcome Trust (2004-2008) as well as an IDEI grant from the Romanian Ministry of Education and Research-UEFISCDI (2008-2011) to extend the investigation of protein folding and viral morphology to the Human Hepatitis B virus (HBV). The group has also focused on prophylaxis antiviral strategies, owing to the award of a EEA grant developed together with Norwegian partners from NIBIO, aiming to develop novel HBV and HCV antigens in plants (2014-2017).
During these 15 years of research on hepatic viruses, Dr. Nichita and her team have been investigating the life-cycles of HBV and HCV and their interaction with the host cells and have significantly contributed to the discovery of novel cellular targets for alternative antiviral strategies against these human pathogens.

Dr. Nichita was a member of the Romanian National Research Council and the President of the Biology Commission (2011-2013); she was the Secretary of the Romanian Society for Biochemistry and Molecular Biology (2007-2015) and is a Member of the American Society for Microbiology (ASM) (since 2013). She was the Vice-President of the Biology Commission of the National Council for Attesting University Titles, Diplomas and Certificates in Romania (2016-2019).
Dr. Nichita has been a peer reviewer for Autophagy, Antiviral Research, Current HIV Research, DNA and Cell Biology, Gene, Hepatology, Journal of Cellular and Molecular Medicine, Journal of Gastroenterology and Hepatology, Liver International, Molecules, Melanoma Research, Molecular Biology Reports, PlosOne, Proteome Science, Trends in Biotechnology, Virology, etc.

Hepatitis B (HBV) and C viruses (HCV) are important human pathogens resulting in more than 500 million people being currently carriers. Sadly, Romania has the highest prevalence of HBV/HCV infections among the EU countries (up to 7% of the population). Chronically infected patients of HBV and HCV are at high risk to develop severe liver diseases, such as fibrosis, cirrhosis, and hepatocellular carcinoma (HCC).

We aim to produce high yields of novel HBV/HCV antigens with superior immunogenic properties in plants and mammalian cells, based on innovative molecular design and establish in premiere an advanced biotechnological platform for production of best vaccine candidates antigens in algae.